Before You Raise TURKEYS - Terminologies and Interesting Facts You Should Know

Ideally, before you raise turkeys, it is helpful that you know the terminologies and interesting facts about turkeys so that you wouldn't be thrown off guard when you read any related materials about turkeys. Raising turkeys on a small farm can be fun and profitable because they can be rotated like any other cash crop on your property. If you have a few acres that you could rotate pastured turkeys on, this could be a good side business for the small farmer.

Here are some terminologies to broaden your horizon when you raise turkeys:

Poult
Young one of turkey

Dewlap
A large flap skin is seen immediately below the chin

Debeaking
Poults should be debeaked to control feather picking and cannibalism. Debeaking can be done at day old or 3-5 weeks of age. Remove the beak at about one half the distance from nostril to the tip of the beak.

Desnooding
Removal of the snood or dewbill is to prevent the head injuries from picking and fighting. At the day old the snood can be removed by thumbnail or finger pressure. At 3 weeks of age, it can be cut off close to the head with sharp scissors.

Detoeing or toe clipping
Clipping is done at a day old by removing the tip of the toe just to the inside of the outer most toe pad including the entire toenail.

When most people think of a turkey they think of Thanksgiving dinner. While most who raise turkeys raise them for eating, some keep turkeys as a pet. And some do both, keep some as a pet while eating the others. There are many different breeds of turkeys, however, there are two varieties, domestic and wild. The wild turkey lives and breeds in the wild and some are kept as pets. It can fly and is said to be smarter than the domestic.

The turkey's crop is also called the craw. When turkeys feed they swallow lots of food which is stored in their crop. They then go to a safe place to loaf and process the food. Before you raise turkeys too, you need to know that turkeys don't have teeth, but they grind their food (even hard seeds and nuts like acorns) in their second stomach, the gizzard. This is the muscular stomach below the crop which is the glandular stomach. Look for the gizzard in the giblet bag.

Posted by Werner Cappel at 11:21 No comments: 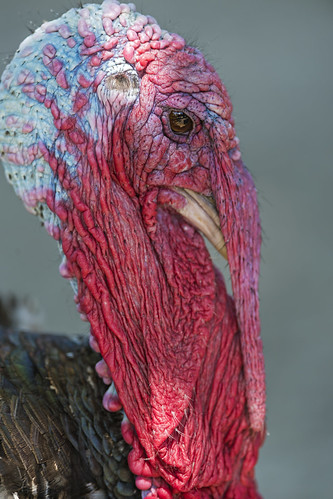 The turkey is a large bird, native to North America. It is distinguished by its white plumage and a bare wattled neck and head. The name turkey was first applied to the guinea fowl that was thought to have originated in Turkey. However, the American turkey is a quite different species from the guinea fowl, though the name remained. In fact, the wild turkey was a staple food in the North American diet. It was known as a "Peru" in the 18th century. Some common breeds of turkey are Narragansett, Bronze, White Holland, and Bourbon Red.

There are three stages in Raising Turkeys: the breeder farm, the hatchery, and the turkey farm. The breeder farm is the place where the hen lays the eggs. These eggs are collected and sent to the hatchery. In the hatchery, the eggs are kept in special incubators after cleaning. These incubators provide the right temperature and humidity levels for allowing the eggs to hatch. Generally, turkey eggs take 28 days to hatch. The baby turkeys, also known as poults, are kept in the hatchery until they are moved to the turkey farms.

In the turkey farms, the hen turkeys and the tom turkeys are reared separately. The poults should be fed properly and watched carefully, at least until they shed their down feathers and get the outer feathers. For this, they are put in climate-controlled barns that have soft flooring covered with straw or wood chips. They are fed on a soft powdered mixture of soybean, corn, and wheat. Other nutrients like barley, milk powder, meat meal, limestone, salt, vitamin premix, methionine, lysine and insoluble grit can also be added. Adequate water should also be provided.

Today, many advances have been made in the genetics of turkeys. This has helped to increase the size of the bird with lesser feed and in lesser time. The white broad-breasted turkey has been the most common commercially raised turkey breed, since the 1960s. There are also different strains of the white broad-breasted turkey that are reared in different parts of North America. Turkeys are bred specially to have more meat in the breast and thighs. White feathered turkeys are generally preferred since they do not leave any ugly pigment spots when plucked.

Turkeys take around 4-5 months to grow to full size. Birds less than 8 months of age are known as young turkeys. The hen turkeys take 16 weeks to mature completely and average around 8 to 16 lbs in weight. The tom turkey takes around 19 weeks and weighs anywhere between 16 and 24 lbs. Larger tom turkeys may weigh up to 40 lbs. These take a few more weeks to mature. A breeder tom turkey can generate up to 1,500 poults in a hen's six-month laying cycle.


Turkeys are given a balanced diet comprising mainly of soybean and corn. This is also supplemented with minerals and vitamins. A 30-pound tom turkey (male) needs around 84 lbs of feed on an average. The cost of the feed is generally 2/3 of the total cost. Use of growth hormones for Raising Turkeys is banned. Sometimes, antibiotics are also given to turkeys to prevent diseases and to increase feed efficiency. The quantity of antibiotics to be given and the withdrawal period are determined by the FDA (Food and Drug Administration) and the FSIS (Food Safety and Inspection Service).

The turkey's health is inspected by the United States Department of Agriculture (USDA) or other state systems, and it may also be graded for quality. Turkeys that have been on antibiotics are not allowed to be processed for some time until the residue of the medicine has cleared from the body. Turkey farms are generally comfortable, providing shelter from harsh weather, predators, and disease.

Posted by Werner Cappel at 09:26 No comments: